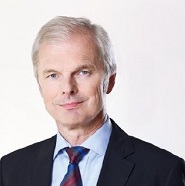 The development of your company’s business in the first half-year was satisfactory overall. We generated post-tax Group net income of EUR 486 million and hence put in place a good basis for achieving our full-year profit target of at least EUR 950 million. The result for the first six months benefited on the whole from pleasing investment income, solid results in life and health reinsurance and an acceptable performance in property and casualty reinsurance. The current underwriting result in property and casualty reinsurance has been adversely impacted by the high level of claims in the second quarter. In addition to the difficult state of the reinsurance market itself, with supply still clearly outstripping demand, a further factor is that the protracted low interest rate environment is substantially cutting into the returns that can be earned on investments. To date, we have succeeded in meeting our exacting targets despite this general business climate.

I would now like to discuss in greater detail the business results for the first half of 2016:

The gross written premium booked for the entire Group fell slightly short of the previous year’s figure at EUR 8.3 billion; this was due to property and casualty reinsurance. As you are aware, in the current soft market for property and casualty reinsurance we attach greater importance to safeguarding the profitability of the business than to boosting premium income. We continued to be guided by this principle in the latest treaty renewals as at 1 June and 1 July of this year. As had already been observed in prior rounds of renewals, we did, however, see some indications of a bottoming out in reinsurance prices. This was particularly the case in North America, where we were able to write attractive new business. We also booked growth in specialty lines. On this basis, we generated premium growth of around 8 percent for our total volume of renewed treaty business.

On the claims side, the major loss incidence rose again for the first time in the second quarter of 2016 after several reporting periods with moderate losses. Particularly noteworthy here are the severe earthquakes in Ecuador, Japan and Taiwan, storms in Europe and devastating forest fires in Canada; there were also a number of loss events associated with individual risks. Altogether, net loss expenditure in the second quarter alone amounted to EUR 298 million; it thus came in far higher than our budgeted level of EUR 167 million. Total net major loss expenditure for the first half of the year amounted to EUR 353 million; in the comparable period the figure had been just EUR 197 million. Against this backdrop, the underwriting result decreased by around 3 percent and the operating profit (EBIT) of EUR 561 million fell slightly short of the previous year’s period (EUR 584 million).

We are satisfied with the development of our business in life and health reinsurance in the first half of 2016. Coming in at just under EUR 180 million, another solid operating result (EBIT) was achieved. While the previous year’s figure was around EUR 20 million higher, it had been assisted by a special effect of EUR 39 million stemming from recognition of a fee that became payable following a customerinitiated withdrawal from a transaction. The very positive underwriting performance was to some extent overshadowed by the adverse risk experiences of prior underwriting years in US mortality business. Premium income also developed in line with our expectations: adjusted for exchange rate effects, gross premium would have increased by 4 percent to EUR 3.8 billion.

We are seeing further stable demand in the area of longevity risks. This is being driven by the progressive demographic shift worldwide and the associated awareness of the need to take out private provision for old age. Coverage concepts for insurance products that reward a healthy lifestyle are coming to play an increasingly prominent role. We are a major player in the launch and further development of these so-called “vitality concepts”.

In view of the volatile environment we are highly satisfied with developments on the investment side. Our portfolio of assets under own management increased again from EUR 39.3 billion as at 31 December 2015 to EUR 39.8 billion. Along with the challenges facing us as an investor on account of the protracted low level of interest rates, we also had to negotiate uncertainties on the markets resulting from the referendum held in the UK, in which a majority of the British population voted to leave the European Union – causing prices to plunge on global equity markets and prompting further declines in interest rate levels. Continued volatility must be anticipated on international capital markets, especially for as long as the consequences of the Brexit vote cannot be fully evaluated.

Despite these adverse market conditions we are thoroughly satisfied with the development of our ordinary investment income. Although it contracted somewhat from EUR 599 million to EUR 568 million, it should be borne in mind that the previous year’s period had been assisted by a positive special effect of EUR 39 million. Income from assets under own management stood at EUR 569 million; the figure would be on a par with the previous year after factoring out the special effect. The return on investment of 2.9 percent for our assets under own management puts us exactly on pace to achieve our expected target.

Shareholders’ equity rose to EUR 8.4 billion as at 30 June 2016 despite the dividend payment of EUR 573 million. The annualised return on equity amounted to 11.8 percent and thus continues to be above our minimum target. The decrease relative to the previous year can be attributed largely to the further rise in the average shareholders’ equity. This was driven not only by the generated year-end profit but also by a further rise in the valuation reserves in our investment portfolio owing to even lower interest rates.

As I have already indicated, the challenges facing the reinsurance and capital markets are currently very considerable. We are nevertheless standing by our full-year guidance for Group net income of at least EUR 950 million. As always, this forecast is subject to the proviso that major loss expenditure does not significantly exceed the budgeted level of EUR 825 million and that there are no unforeseen distortions on capital markets.