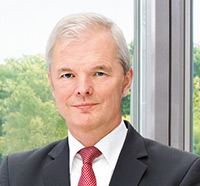 I am delighted to report that once again we were able to start the new financial year on an exceptionally successful note in 2015. This is especially gratifying against the backdrop of the sustained difficult business environment in the international (re)insurance industry and the continued challenge posed by low interest rates. We were able to boost Group net income by another 20 percent to EUR 280 million for the first quarter and thus put in place a good foundation for achieving our 2015 profit target of around EUR 875 million.

The key factors that led to this good performance were an outstanding result in life and health reinsurance and another satisfactory underwriting profit in property and casualty reinsurance. Investment income also fully lived up to our expectations. Not only that, our gross premium volume – adjusted for exchange rate effects – comfortably beat our expectations with growth of 10 percent for the first quarter.

I would now like to give you some details about the development of our business in the year to date:

Following three consecutive years of low major loss expenditures and very good results, property and casualty reinsurance markets are again seeing fierce competition in the current year. Fewer risks are being reinsured by our ceding companies on account of their healthy capital resources. The inflow of capital from the ILS market is adding to this capacity surplus. As anticipated, these factors were also crucial in shaping the treaty renewals as of 1 January 2015, when around 65 percent of our property and casualty reinsurance portfolio was renegotiated. Despite the challenges described above, we were nevertheless satisfied with the outcome of the renewals: while the price decline in many markets was significant compared to the previous year, we achieved adequate results thanks to our good rating and long-standing customer relationships. Although we continue to adhere systematically to our selective underwriting policy, we were able to preserve the stability of our portfolio. German and US business proved particularly durable in this renewal season. Growth opportunities presented themselves in Asia- Pacific markets and in Latin America.

Gross premium in property and casualty reinsurance – adjusted for exchange rate effects – grew by a substantial 13 percent to around EUR 2.4 billion as of 31 March 2015. Particularly significant here were increases in emerging markets, the United States and in the area of agricultural risks. A special effect also played a part in connection with our facultative reinsurance business, a partial portfolio for which we have refined our methods used to calculate and defer estimated amounts from reinsurance treaties not yet brought to account. This effect led to non-recurring additional premium of EUR 93 million. Even if this special effect is eliminated, we were able to grow our gross premium by roughly 8 percent on a currency-adjusted basis. This figure beats our expectations and shows that we have made a highly successful start to the 2015 financial year. A healthy operating profit (EBIT) of EUR 255 million was generated in property and casualty reinsurance. The fact that it falls short of the figure for the comparable period can be attributed primarily to lower investment income on account of negative fair value changes in our financial assets measured at fair value through profit or loss. This was due principally to the performance of our inflation swaps. We benefited from the continued good quality of our portfolio and from reduced retrocession costs. The combined ratio of 95.7 percent was once again better than our target figure. Major loss expenditure in the first quarter remained below our expectations. The largest single loss for our account was the storm “Niklas”, which caused considerable damage in Europe. One event, however, affected us all especially deeply: the crash of the German passenger jet in the French Alps on 24 March 2015, which cost 150 people their lives. Given that we maintained our prudent reserving policy with respect to the pro rata portion of the major loss budget, its underutilisation largely had no implications for income.

We are thoroughly satisfied with developments in our Life & Health reinsurance business group. As expected, we booked currency-adjusted premium growth of almost 7 percent to EUR 1.6 billion, with Asian markets playing an especially prominent part here. While the international market climate remains competitive due to the protracted low level of interest rates, we nevertheless see further opportunities for sustainable growth going forward thanks to our worldwide presence. These include, inter alia, reinsurance solutions in the area of longevity risks. Profitability was significantly more favourable than in the comparable period of the previous year: the substantially improved result shows that the steps taken to boost profitability in our Australian disability portfolio and to some extent also in US mortality business are making themselves felt. Not only that, we booked a special effect in the ordinary investment income. The operating profit (EBIT) showed a very pleasing increase from EUR 66 million to EUR 173 million.

We are also satisfied with the development of our investments: building on the appreciable increase in 2014, the portfolio of assets under own management recorded further vigorous growth to reach roughly EUR 40 billion – a gain of 9.5 percent. This was driven above all by the increase in the valuation reserves as a consequence of the decline in interest rates as well as by the weakness of the euro against our main investment currencies. Although interest rates continued to move lower, ordinary income from fixed-income investments excluding interest on deposits increased on the back of larger asset holdings. As a result, and also due in particular to the aforementioned special effect in life and health reinsurance, investment income from assets under own management rose appreciably despite the drop in net unrealised gains and lower realised gains. The generated return on investment (excluding ModCo derivatives and inflation swaps) of 3.5 percent leaves us very well placed to achieve our target.

The sharply higher valuation reserves and positive movements in exchange rates served once again to substantially increase your company’s shareholders’ equity. Compared to the position as at 31 December 2014, shareholders’ equity grew by almost 13 percent and now stands at EUR 8.5 billion. This corresponds to a book value per share of EUR 70.68. Despite the increased capital we achieved an attractive annualised return on equity of 13.9 percent.

In view of the good start to 2015, I would like to confirm to you our guidance for Group net income in the order of EUR 875 million for the full financial year. As always, this forecast is subject to the proviso that major loss expenditure does not significantly exceed the expected level of EUR 690 million and that there are no substantial downturns on capital markets.